Women’s centre accomplished a lot in 2003. We completed the research project on domestic violence, which was supported by DFID and published in a brochure “Domestic violence in Trebinje municipality”. Within this research, we made recommendations for Action plan. Our presence in media was also significant; we participated in local radio shows, as well as in shows on national TV.

Through our research we collected documentation and finally defined need and demands. Within the playrooms for children conducted by a social worker and a pedagogue, children, victims of domestic violence showed their feelings and needs through games and drawings; children’s feelings, fears, love, hatred, rage, all of this was recognized through 16 of those playrooms, opening the possibilities to help those children control their emotions in a positive way. We had 10 children per group.

At the same time, we had workshops for women, victims of domestic violence. One neuropsychiatrist, one social worker and one clinical psychologist conducted four workshops with 8 women. They tried to help women find way out of their family and personal crisis, showing them every possible support.

Another project, organized in 2003, which was supported by Gender Centre of Republika Srpska, was conducted in 18 local communities. The primary goal was to educate women in basic elements of economy, politics and family life. Therefore we organised 6 educational workshops, conducted by professionals and experts from Republika Srpska. The project lasted for 6 months and was attended by 120 women.

The Centre organized a working therapy for 18 women, victims of domestic violence. That was training for upholsterers. Bearing in mind the fact that several years lasting violence causes broken personalities, we believed that this type of useful activity would be a good way for them to gain self-esteem and to feel useful in society. This training was supported by Swiss Agency for Development and Cooperation, State Secretariat for Economic Affair, Embassy of Switzerland Cooperation Office. The project lasted for 6 months and included 18 women.

Women’s centre had a 5 months long project which focused on reinforcement of the Organization’s capacities. We organized round tables for victims of violence which was supported by Swedish organization Kvinna till Kvinna. We accomplished to develop capacities of our organization. We also educated 20 women, victims of domestic violence about human rights and current legislation that deals with this issue.

There is an ongoing project (September 2003 – May 2004) of educational workshops focusing on trafficking, i.e. its prevention. It has been supported by the STAR Network of Work Learning, supported by Zonta International Foundation – Batcom. Bearing in mind a geographical position of Trebinje (located near the borders with two neighbouring countries Serbia and Montenegro, and Croatia) and the fact that Bosnia and Herzegovina is a poor country in transition, we decided to conduct 18 workshops in all four grades of secondary education, as well as workshops for 8th and 9th grade of primary education.

Prior to the workshop activities, we conducted a poll which was aimed to help us determine a level of awareness and knowledge regarding this issue, among primary and secondary school students. After the completion of workshop activities, we intend to conduct another poll which would be evaluation of the results of workshops. During this year, we conducted workshops in all high schools. The workshops encompassed different topics; venereal diseases and psychological changes that accompany them (conducted by a doctor specialist), discovering methods and police acknowledgements about drugs and drug dealing (conducted by the members of police drug team) and “Safe House” project made by NGO La Strada (conducted by a trainer from that organization, where she shared her experiences regarding problems of trafficking in Bosnia and Herzegovina). There were around 300 participants in all workshops.

Women’s centre working results, for the time being, are the following: 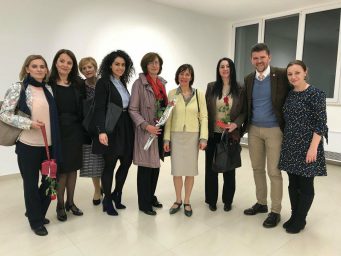